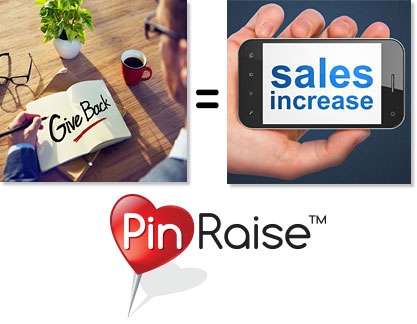 Now helping raise funds for worthy non-profits is as easy as taking a shopping trip to some of your favorite merchants. PinRaise Inc., a new fundraising mobile application that launched in July, has turned a corner in Orange County CA – signing 75 local merchants and over 11,000 PinRaise member users that help support 30 local nonprofits.

PinRaise founders met with large and small businesses across Orange County CA to find local merchants willing to give back a portion of the purchases made at their stores to local churches, schools and nonprofits. In turn, participating nonprofits direct and encourage their members and followers to download the PinRaise mobile app and shop participating merchants.

The app displays the participating merchants and lets shoppers direct the donation to their charitable cause; the donations are usually the equivalent of a dollar-off coupon.

Participating merchants receive a trademarked “Business with Heart” designation – signifying their willingness to give back to the community they serve. The program is essentially a goodwill “Loyalty” program, as their donation will help generate repeat customers. With PinRaise, businesses win, consumers win and nonprofits benefit.